Diabetes can affect the eye in many different ways, and often you will not know there is anything wrong even with quite severe and advanced diabetic eye disease.

The back of the eye has a light-sensitive lining called the retina, similar to the film in a camera. Light is focused through the eye onto the retina, allowing us to see. The centre part of the retina is called the macula and the very centre of the macula is called the fovea. It is here that light must be focused for us to see fine detail, to be able to read and to see in colour.

In diabetes, high blood glucose levels damage the small blood vessels that bring oxygen to the retina. The blood vessels become leaky and eventually shut down so that the retina doesn’t get enough oxygen. In the eyes, we can see this damage by examining the retina, but the same sized blood vessels in other parts of the body such as the kidneys and nerves, are also being damaged at the same time.

In the early stages of Diabetic Maculopathy, there may be small swellings, called microaneurysms on the smallest blood vessels (capillaries). These can leak fluid (oedema) and fatty substance (lipid, also known as hard exudates) into the retina. When the leakage is away from the centre of the macula you may not notice any loss of vision, even with quite advanced changes. When the leakage occurs very close to the centre of the macula, near the fovea, even small amounts of swelling can affect vision. Research studies have shown that good control of your blood sugar, blood pressure and cholesterol delay the development of diabetic eye disease. If Diabetic Maculopathy is detected and treated early it can reduce the risk of severe visual loss.

What is a diabetic vitreous haemorrhage?

How does vitreous haemorrhage affect the vision?

If there is only a little bleeding you will experience haziness and some new floaters (wispy shadows like dark hairs or blobs which move around and are most noticeable against a bright background) but with more bleeding the blood can block the eyesight. If you think of your eye as a camera, light has to pass through the eye to the retina. The retina is like the film in the camera and lines the inside of the back of the eyeball. Therefore blood inside the eyeball can block the eyesight by getting in the way of the light passing through the eye (see pictures below).

The pictures below show the eyeball as if it has been cut in half and seen from the side. In the first picture of the normal eye the light passes through the clear cornea and then through the lens which focuses the light. The light then passes through the vitreous onto the retina. The retina sends a signal along the optic nerve to the brain.

In the picture below there has been bleeding from some abnormal blood vessels growing from the surface of the retina.

How is diabetic vitreous haemorrhage managed?

In some cases it is possible that you will be advised to wait for the blood to clear spontaneously. Laser treatment may then be performed to try to reduce the chance of further bleeding.

Alternatively a vitrectomy operation can be used to remove the vitreous – and with it most of the blood. If there has been no previous laser treatment then I would recommend an early vitrectomy. If the vitreous is removed the chance of further bleeding may be reduced if the vitreous was pulling on the abnormal blood vessels. Laser treatment will be applied to the retina at the time of vitrectomy surgery. Sometimes, vitrectomy surgery has to be combined with repair of a retinal detachment caused by abnormal blood vessels pulling the retina out of place.

Injection of drugs into the eye, such as ranibizumab or aflibercept, may also play a role and these treatment options will be discussed with you.

In the UK we have a diabetic eye-screening programme, and people with diabetes are invited for a local photographic eye-screening test once a year. It is really important that you attend this, as it is a good way of detecting diabetic eye disease before you develop loss of vision. Do not confuse the DESP appointment with your optician’s eye tests – you need to attend your diabetic eye screening appointment even if you have already been seen by your optician, as the two examinations focus on different aspects of your eye care.

This test shows the macula in 3D, and is particularly useful to see if there is any swelling or fluid at the back of your eye. The OCT angiography is a newer, non-invasive test that can look at the small blood vessels and circulation at the centre of the retina.

This is an imaging test that takes photographs of retinal blood vessels after a dye called fluorescein has been injected into a small vein in your arm. The dye travels to the blood vessels in the eye, and photographs are taken over a period of several minutes while you rest your chin and forehead on a stand to help you keep still. Most people cope very well with the test. Some people have an allergic reaction to the dye, and like any allergy the reaction can range from a mild rash, to wheezing or, in exceptionally rare cases, anaphylaxis. The test is therefore done in an appropriate setting with a specialist team supporting the patient throughout. You will usually be monitored for up to 30 minutes after the angiography, as most allergic reactions will have shown up by this time.

First and foremost you should optimize you blood glucose levels, blood pressure and cholesterol levels. Your GP will be able to help you with this, and you may need to see a diabetes specialist a few times to design a treatment regime that works best for you. You should also stop smoking.

Alongside improvements in your diabetes control, you may benefit from either laser treatment or a course of intravitreal injections into the eye, or a combination of the two.

Laser and other treatments

This can be applied as targeted laser to small clusters of leakage, called focal laser, or as a diffuse application to a larger area, known as macular grid laser. Both eyes can be treated at the same visit. Newer laser techniques are very gentle and still effective, with fewer visual side effects than the older style lasers, and may be offered as a treatment option if suitable for you.

These are usually given as course of injection 1 month apart for a minimum of four months, potential continuing for many months according to the response to treatment. There are different drugs that can be injected, and they work to reduce leakage of fluid from the small blood vessels at the macula. In the NHS they are only licensed for use in certain cases of macular oedema.

The laser heats up and deliberately destroys some of the peripheral retina and this is thought to reduce the oxygen demands of the retina. This in turn reduces the drive for the new abnormal blood vessels to grow, and causing existing abnormal blood vessels to shrink. Laser treatment can affect the peripheral vision and this may be considered to be a necessary consequence of efforts to try to protect central sight.

What are the risks of laser treatment to the retina for new vessels?

Laser can result in reduced peripheral field (or side vision) and reduced night vision. Sometimes this can stop patients driving because the DVLA standards require patients to have a certain amount of peripheral field.

The licencing authority (DVLA in the United Kingdom) has visual standards that must be met for you to be allowed to drive. All people with diabetes taking tablets for diabetes or insulin should inform the DVLA and in many cases patients with diabetes will be allowed to continue driving. If you have any treatments to the retina again it is important to inform the DVLA to make sure that you still meet their requirements.

· Are you having difficulty seeing the TV screen clearly or reading subtitles?

· Are you struggling to recognize bus numbers or people’s faces until they are really close?

· Is it difficult reading small print unless the lighting is really bright?

· Do you feel that your glasses aren’t giving you clear vision, and your optician has said that
they can’t improve with a new prescription?

· Do you have hazy vision?

· Is it difficult to see clearly when you are driving?

· Do you have glare with night driving or in bright lights (such as supermarket lighting)?

· Are you having difficulty reading music?

· Is your vision affecting your work?

· Do have a particular hobby or interest that your vision is affecting?

What does treatment involve? 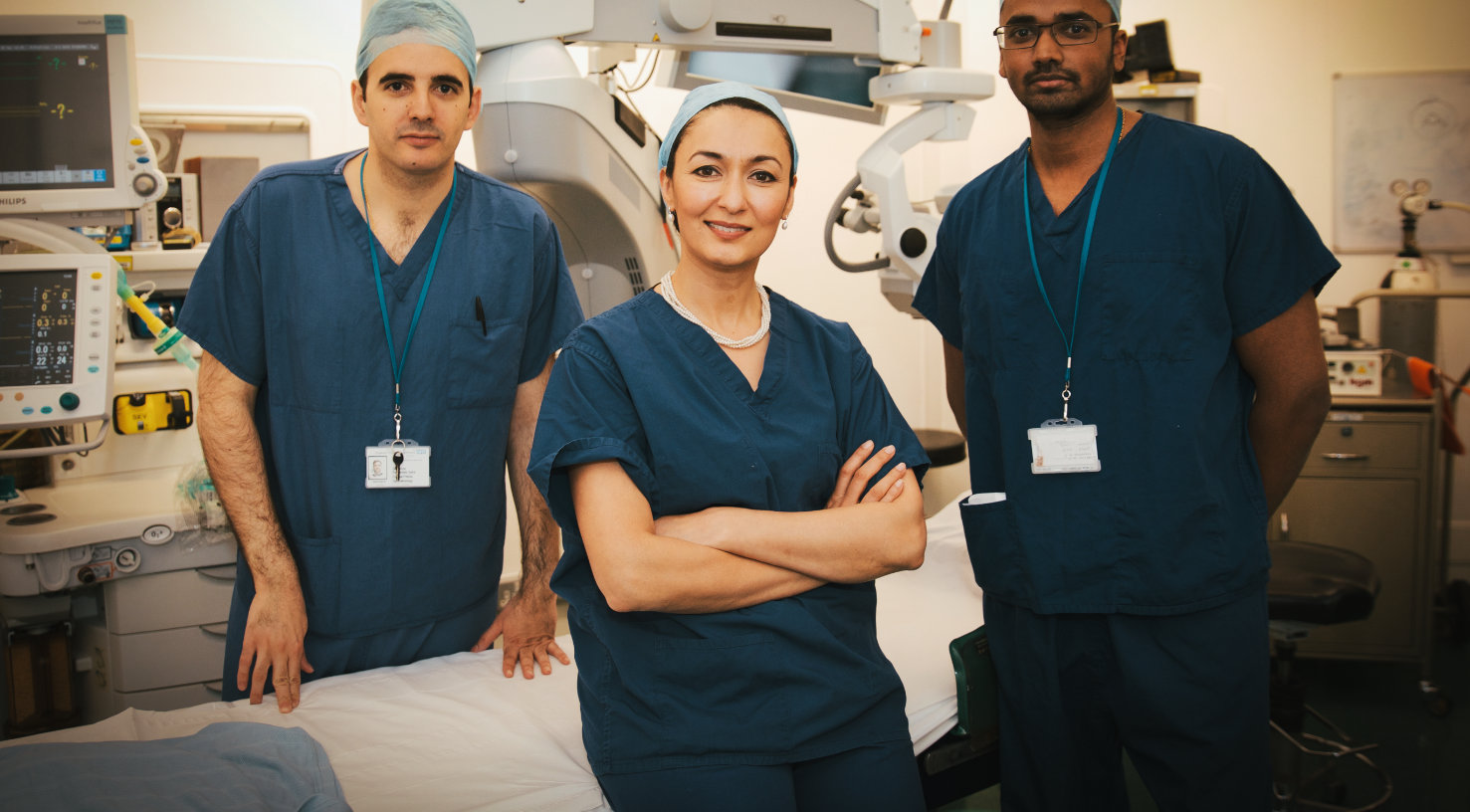 What to expect at your diabetic retinal laser appointment

Diabetic macular grid laser and focal laser are both done as an outpatient procedure, meaning that you come to a clinic, have the treatment and go home shortly after. You will have dilating drops applied to the eye receiving treatment, and once the pupils are dilated you will have some anaesthetic drops. The laser machine is very similar to the slit lamp that you usually sit at to have your eyes examined, with your chin on the rest and your forehead steadied on a supporting band. A special contact lens is then held on the eye, and the laser beam is focused through this to treat the retina. You will notice bright flashes, but it is not usually painful.

What to expect at your intravitreal injection appointment

Intravitreal injections are used for many eye conditions, including wet macular degeneration. The injection is given as an outpatient procedure. The injection procedure takes only a few minutes. You will have dilating drops to make the pupil large and anaesthetic drops to numb the surface of the eye. You will lie on a couch, the eye area will be cleansed to reduce the risk of infection, and an eyelid speculum (a little device to help keep the eyelids open) is placed on the side having the injection. The injection itself is very quick.

After the injection is given, your vision will be checked, the back of the eye may be examined and you will be given drops to use at home for a few days.

One of the most serious risks following an injection is the development of a severe eye infection known as endophthalmitis. You should seek a review with your doctor if you develop any of the following:

Other side effects include vitreous haemorrhage, retinal detachment and cataract.